SPOTIFY REVIEW: Lacrosse "Are You Thinking of Me Every Minute of Every Day?" (Tapete Records) 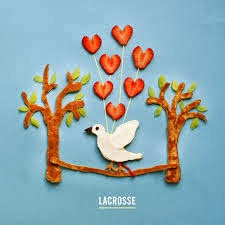 Perhaps it was just my mood, perhaps I had heard enough music at the time, but when I first put this one on I was quickly turned off by what I felt to overly poppy.  Isn’t it funny how moods can affect the reviews?  If you’re having a bad day, an otherwise passable piece of music might get bashed.

I let this one simmer for a little while, then went back to it and wasn’t nearly as annoyed.  One of my first notes was that it was “way too poppy”, but after giving it some time I no longer really heard that.

If nothing else, this album is pop punk.  Male and female vocals sing at the same time, which is not something you hear as often as them taking turns.   It has hints of 8bit at times, but also reminds me of some bands I listened to back in the early ‘00’s such as Veronica.

I would say that I would have to be in the proper mood to put this one on, but yes, I do enjoy it when I’m not easily annoyed or frustrated.
Posted by Joshua Macala at 6:12 PM